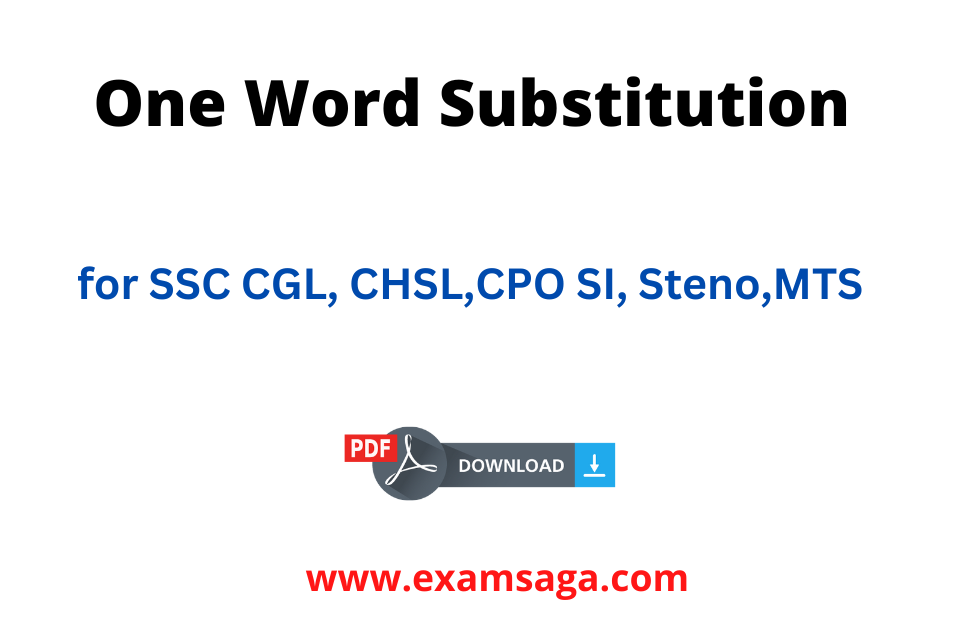 Most important One word Substitution

Answer:- Abattoir
Abbot – A man who is the head of a monastery or an abbey.
Abbreviation – A shortened form of a word or phrase.
Abdication – To formally give up.

Answer:- Ablution
Abstruse – Hard to understand.
Abundance – A quantity that is more than enough.
Accentuate – Give more force or importance to.

Answer:- Accomplice
Acronym – Word formed from initial letters of a name.
Addendum – Thing to be added at the end of a book, etc.
Advertisement – A public notice offering or asking for goods,
services, etc

Answer:- Afforestation
Agenda – Items of business for consideration at a meeting.
Aggressor – Someone who attacks first.
Agnosticism – Doubtful about the existence of God

Answer:- Alien
Alimony – Allowance fixed after divorce to a wife.
Allegory – Story in which ideas are symbolized as people.
Widow – A woman whose husband is dead

Answer:- Altruist
Amateur – Lacking professional skill or expertise.
Ambassador – A diplomatic representative of one country in another.
Ambidextrous – Equally skilful with each hand

Answer:- Ambiguous
Amnesia – Partial or total loss of memory.
Amnesty – A general pardon of political offenders.
Amphibians – Animals which live both on land and in water

Answer:- Amphitheatre
Analgesia – The loss of ability to feel pain while still conscious.
Anarchy – The absence of government in a country.
Anarchist – One who wishes to destroy all established government’s
law and order

Answer:- Anecdote
Anniversary – Yearly return of the date of an event.
Annual- That which happens once in a year.
Anomaly – Deviation or departure from common rule or standard
or what is normal.

Answer:- Anonymous
Antagonist – One that opposes other.
Antidote – A medicine to cure the effect of poison.
Aphasia – Loss of ability to understand speech