In this post-Examsaga team shares, all UPSC NDA solved Paper of the last ten years PDF in Hindi and English. Candidates who are preparing for this exam must download this previous year’s papers it will help in their preparation. All the other important details regarding UPSC NDA/NA exam are given in this post.

Union Public Service Commission UPSC conducts recruitment for the post of National Defence Academy NDA and Naval Academy NA twice a year. Those candidates who want to serve the country in NDA/NA must apply for this exam UPSC NDA/NA 2022. You can easily qualify for this exam if you have proper guidence .With proper practice of UPSC NDA Previous Year Question Papers and Some sample papers you can boost your preparation and get confident to crack the examination. 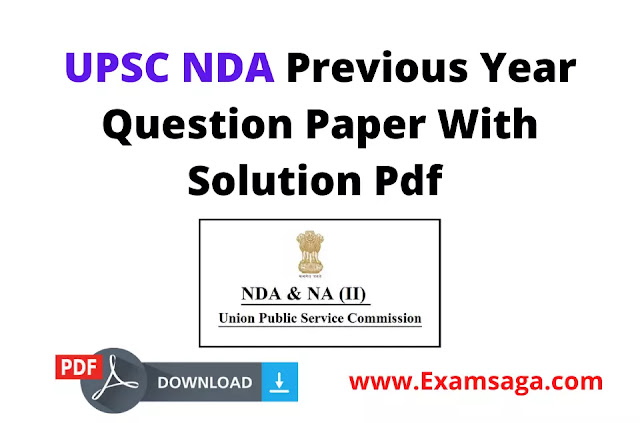 UPSC NDA exam pattern consists of two written examinations on the same day with SSB interviews. The detailed Exam pattern Scheme Of the UPSC NDA Examination is given below.

UPSC NDA Solved Paper of Last Ten Years Pdf Download in Hindi and English are given below with complete solution.

1. It will give an overview of the previous year’s questions of the UPSC NDA/NA examination.
2. UPSC NDA Previous Year Question Paper help in analyzing the difficulty level of the questions.
3. Helps in identifying your Weak topics of subjects in UPSC NDA/NA and then work on it to improve it.
4. It will improve your speed and accuracy by Solving UPSC NDA Previous Year Question Paper and sample papers.

2. MATRICES AND DETERMINANTS : Types of matrices, operations on matrices. Determinant of a matrix, basic properties of determinants. Adjoint and inverse of a square matrix, Applications-Solution of a system of linear equations in two or three unknowns by Cramer’s rule and by Matrix Method

The question paper on General Knowledge will broadly cover the subjects : Physics, Chemistry, General Science, Social Studies, Geography and Current Events. – The syllabus given below is designed to indicate the scope of these subjects included in this paper. The topics mentioned are not to be regarded as exhaustive and questions on topics of similar nature not specifically mentioned in the syllabus may also be asked. Candidate’s answers are expected to show their knowledge and intelligent understanding of the subject.

Section ‘C’ (General Science) Difference between the living and non-living. Basis of Life—Cells, Protoplasms and Tissues. Growth and Reproduction in Plants and Animals. Elementary knowledge of Human Body and its important organs. Common Epidemics, their causes and prevention. Food—Source of Energy for man. Constituents of food, Balanced Diet. The Solar System—Meteors and Comets, Eclipses. Achievements of Eminent Scientists.

Section ‘E’ (Geography) The Earth, its shape and size. Lattitudes and Longitudes, Concept of time. International Date Line. Movements of Earth and their effects. Origin of Earth. Rocks and their classification; Weathering—Mechanical and Chemical, Earthquakes and Volcanoes. Ocean Currents and Tides Atmosphere and its composition; Temperature and Atmospheric Pressure, Planetary Winds, Cyclones and Anti-cyclones; Humidity; Condensation and Precipitation; Types of Climate, Major Natural regions of the World. Regional Geography of India—Climate, Natural vegetation. Mineral and Power resources; location and distribution of agricultural and Industrial activities. Important Sea ports and main sea, land and air routes of India. Main items of Imports and Exports of India.

Section ‘F’ (Current Events) Knowledge of Important events that have happened in India in the recent years. Current important world events. Prominent personalities—both Indian and International including those connected with cultural activities and sports.